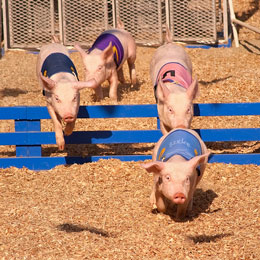 I have a feeling that calling the good old “NC Ag Fest” a smaller version of the State Fair will offend some Agricultural Commissioners, but if you’ve never been, that is probably a good comparison. The Festival draws over 100,000 people, a lot, but also much less than the State Fair. There a rides and food stands, and anything you would expect to find on a farm: tractors, hogs, country music, and cows with big ass horns. (I’ve been told that ‘ass’ is appropriate when used for livestock…)

Specifically for the little ones I would point out the pig races, the petting zoo (with a porcupine?), and the antique tractors and cars. And maybe some of the tamer rides.
(if you follow the links, click Animal Encounters, Motorized Muscle, and Rides, respectively.)

Moving slightly outside the traditional scope of a farm, there will be a Roller Derby on Saturday and a BMX contest on Sunday. There are also country music concerts at night.

Support local agriculture and visit this annual event! It takes place out at the fairgrounds, and admission is free. (But rides, concerts and some other stuff require tickets.)

Pig Race at the Orange County Fair by szeke , used under the  CC BY-NC-SA license